On Thursday I took my 8 year old daughter Zoe to the Festival Theatre, to see Scottish Opera’s The Magic Flute.

I received an invite from Scottish Opera to capture the show with my sketches and thought my keen ballet and theatre fan Zoe would love to come too.

It was our first time to the Opera, as I said to the friendly couple behind us when we took our seats which overlooked the orchestra who were busy getting ready.

The couple told this was a good one to start with as it was in English so easier to follow. The buzz of excitement was all around us and as the lights dimmed the audience hushed.

I knew Zoe had been to the theatre before, to see the Nutcracker by the Scottish Ballet but I also knew it was the dance she was interested in. I was a little unsure about the length of the opera, being around 3 hours in total including a 20 minute interval break.

I needn’t of worried though, from the moment the very funny Papageno (played by Richard Burkhard) appeared on stage with a burst of flames and wearing a colourful outfit Zoe was mesmerised.

Set in a spectacular world inspired by the Victorian futurism of HG Wells and Jules Verne, this production includes plenty of comedy, dialogue and story so that those new to opera can not only follow along but really enjoy the spectacle.

Julia Sitkovetsky, (sketched above) playing the Queen of the Night sang beautifully and had the theatre spellbound during her time on stage. Zoe and I have been (very badly in my case) trying to copy the famous tune. You can see a clip of the show via the Scottish Opera website link below.

The day after Zoe and I drew these sketches from the night, it was a great way to talk about the evening and remember certain highlights. I liked the way The Three Boys floated down to guide the way when needed and Zoe laughed about The Three Ladies that wanted to eat the handsome prince!!

Prices start at £20 per ticket but at the moment if you are under 26 years of age you can get tickets for the opera for just £10 via the Scottish Opera website HERE. 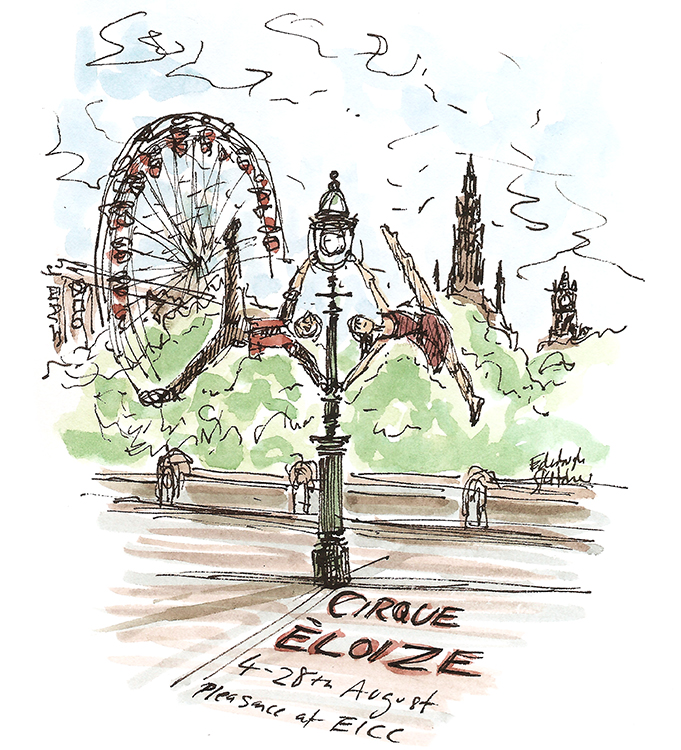 Earlier this month I witnessed the incredible Cirque Éloize performing a few routines at the Mound in Edinburgh.

I passed by with the Sketcher twins (aged 6) and they were in amazed as the dancers shimmied their way up the Scottish National Gallery pillars, hung horizontal from street lamps and juggled each other in front of Edinburgh’s stunning skyline.

In Cirkopolis (at Pleasance at the EICC) Quebec’s Cirque Éloize transform the classic film Metropolis into a virtuosic spectacle for the whole family. As artists rebel, their grey cityscape is replaced by absurd humour, beautiful poetry and bursts of brilliant colour, in a world where fantasy defies reality.

What results is said to be a staggering blend of circus, theatre and dance, and if what the group produced at the Mound is anything to go by, I imagine the show to be  a jaw dropping spectacle for all the family.

Cirkopolis runs until 28th August (not Wednesdays) at Pleasance at the EICC (Venue 150).

This sketch was created with a fineliner pen and watercolours 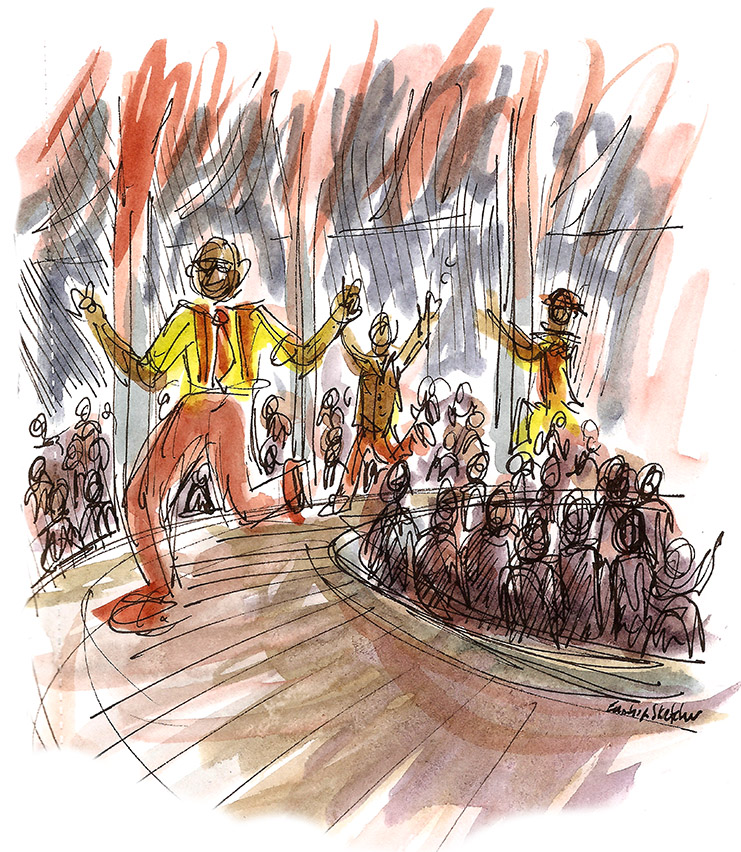 As part of this years Edinburgh’s Christmas celebrations the hit musical Five Guys Named Moe has taken over Festival Square.

Squeezed within the square inside the famous Spiegletent the show is a riot of colour and energy that jives its way through the crowd with the help of a rotating stage and fantastic energy of the excellent cast.

I loved the way the stage was brought out into the audience. giving you a perfect view where ever you are sitting in the Spiegletent, which is this year at Festival Square. Don’t make the same mistake I did and turn up at St Andrews Square, where the venue was last year.

After a quick jog along Princes Street I was soon relaxed (thanks for the prosecco!) and enjoying the uplifting songs, comedy and energy of this hit show. 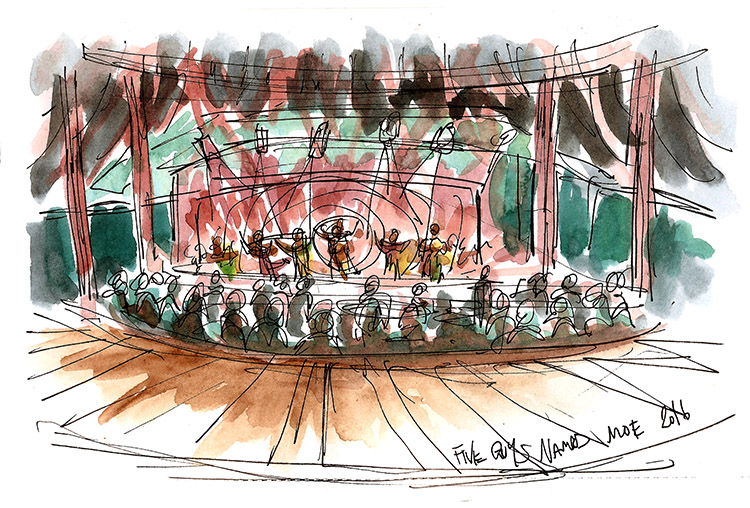 There was a great party atmosphere throughout and I would definitely recommend it for an after work get together or family Christmas night out.

Here are my sketches drawn through the show, all in black pen with a watercolour wash. It was a challenge trying to capture all the colour and movement! 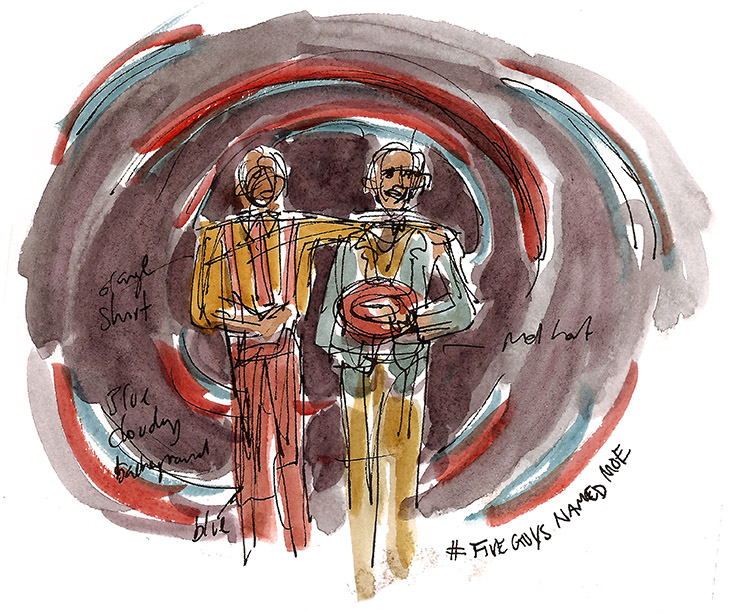 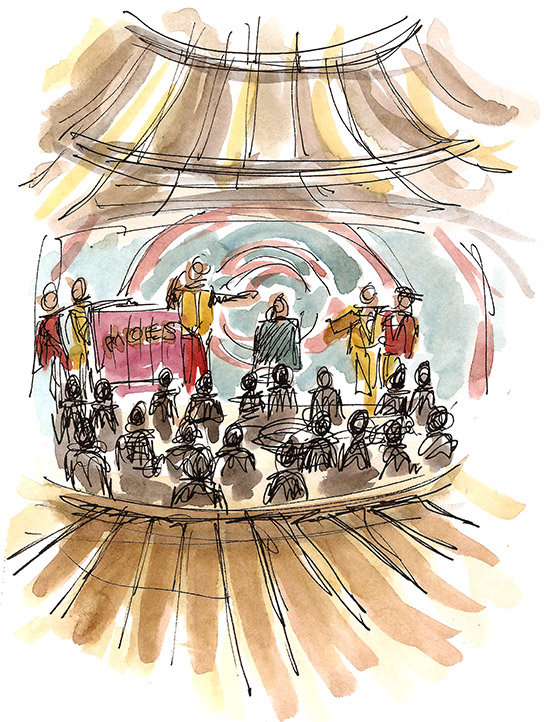 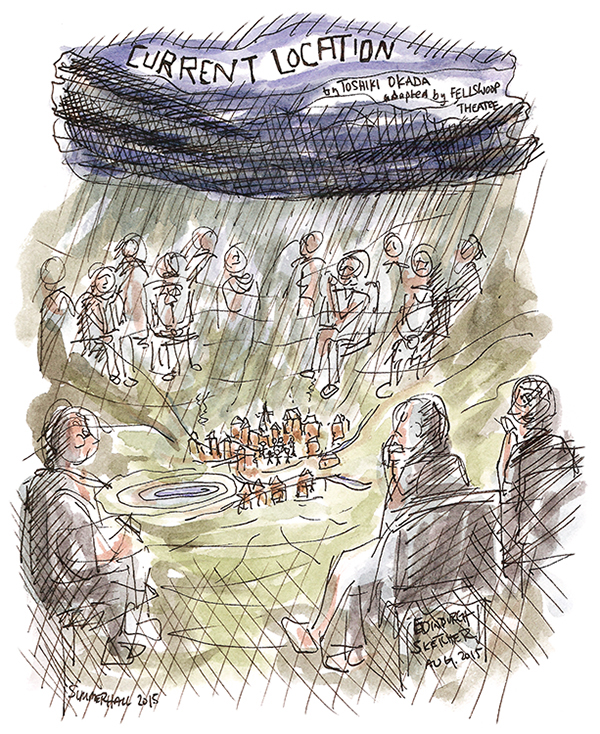 This morning I was at Summerhall to see ‘Current Location’ a play by Toshiki Okada, adapted by Fellswoop Theatre.

Telling a story of one villages perhaps impending doom and how the people living within a small community deal with the loss of control and uncertainty in the air. Gripping from the offset the unknowing of who to believe under constant rumours and counter rumours rings true to real life in 2015 and pulls the audience in as if they were involved.

The play is shown in Summerhall’s large and light Dissection Room, with audience members on both sides of the room looking at each other as the actors play in between. This again pulls you in as if you are included in the discussions and decisions made. A rollercoaster of emotions ensues which should not be missed, see the links below to book your place at Current Location.

The sketch above I made immediately after I left the show, imagining the audience looking into the village and the inhabitants lives, worries and thoughts. 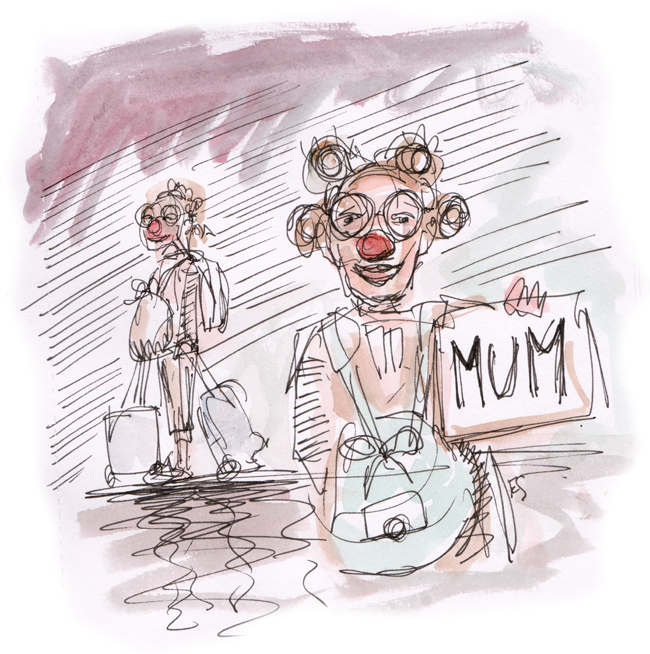 24 hours ago I didn’t think I would be watching a clown on stage going through an emotional journey about loneliness, hope and love.

But here I am in a dimly lit theatre at the Assembly Roxy in Roxburgh Place, watching the magical, hypnotic Sáras Feijóo tell the tale of a brave soul, on a journey to find love. After receiving an invite to sketch at the dress rehearsal I feel privileged to find out about the show and given an insight into the production and planning of an independent show. 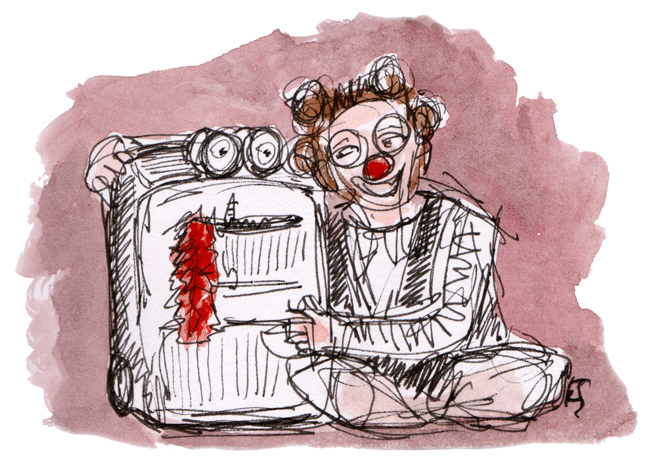 On for only two nights I suggest you don’t miss ‘Blooming Surprise’ at 7.30pm on Fri 12th or Sat 13th December, you will be captivated, perhaps tearful and truly uplifted by the end of the one hour one woman show.  For more information and tickets visit the links below.

To buy tickets for Blooming Surprise 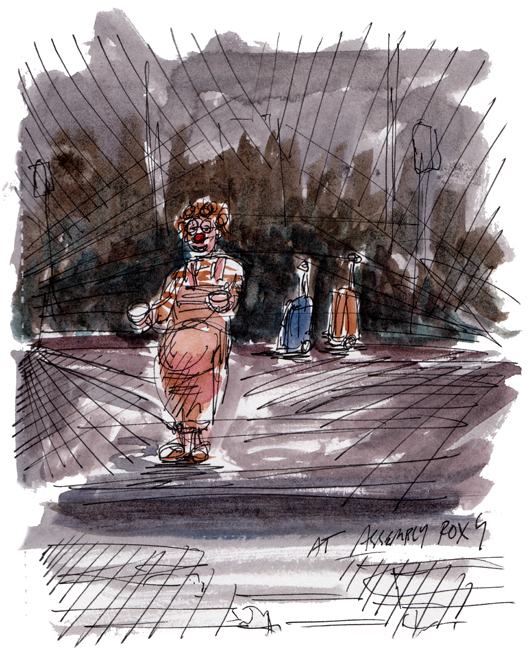 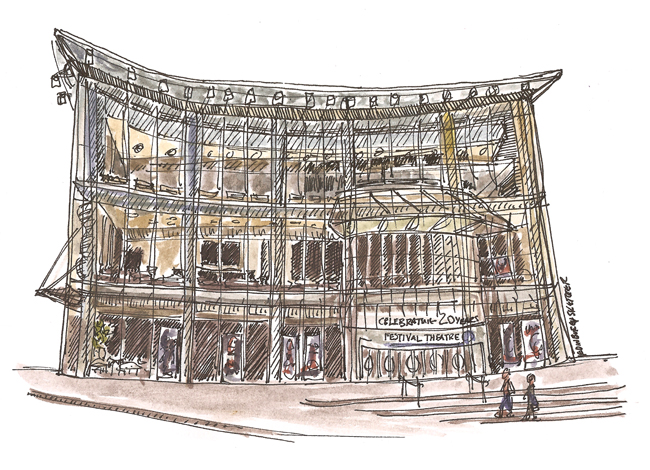 Currently celebrating it’s 20th birthday, this impressive glass building on Edinburgh’s Nicolson Street is home to wonderful performance art; opera, ballet and musicals are regularly on the bill at The Festival Theatre.

I was invited recently to watch the Nederlands Dans Theatre 2 company and it struck me how diverse the range of shows on offer were. My previous visit was to watch the lovely Snowman. Take a look at their website, link below, to see their upcoming shows.

My sketch is in black ink, with a water colour wash. A limited number of mounted prints are now for sale from my online shop HERE, along with my recent sketch of the King’s Theatre, below. 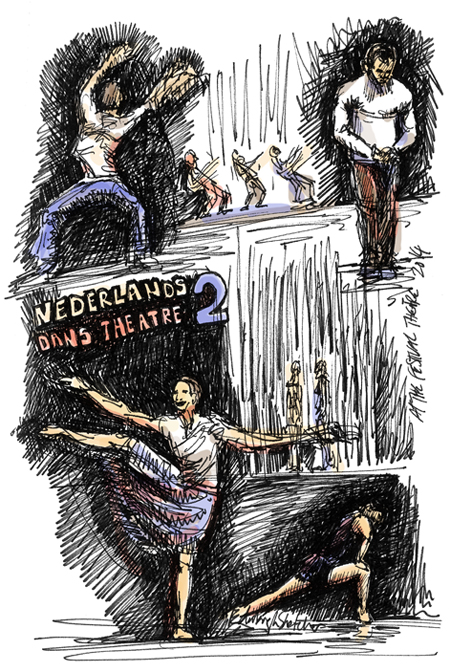 This afternoon I was one of a lucky few to preview the Nederlands Dans Theatre 2, a contemporary dance company visiting the Festival Theatre in Edinburgh.

After receiving rave reviews and standing ovations across the globe the dance company bring their mix of spectacular movement and flamboyant theatre to the Festival for just two nights, their only UK appearance.

I loved the great music and completely new dance moves. If there are tickets left I thoroughly recommend seeing the show, the website link is below.

The sketch is a montage of different parts of the show, scribbled in black ink and then coloured digitally later. 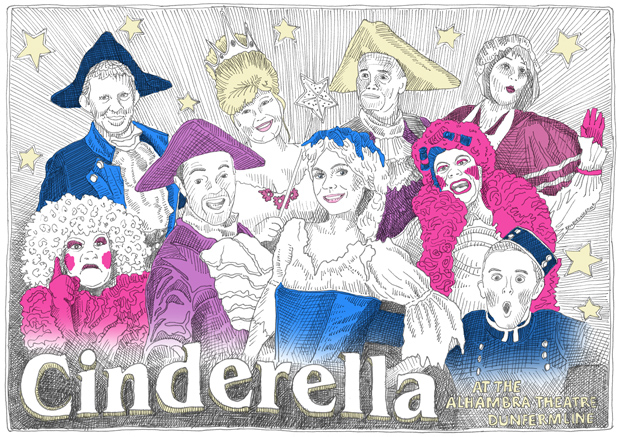 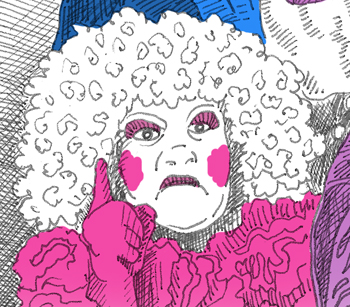 Good luck to the cast and crew giving their all at Alhambra Theatre in Dunfermline right now, and throughout the festive period into the new year in the pantomime Cinderella.

I designed and sketched the image above for Director Liam Rudden, who used the sketch on a good luck card for all the cast. It was a pleasure to do and I wish all the actors the best of luck in what is already being called one of the must see pantomimes this year, and only around half an hour away from Edinburgh in the car.

For more information about the Alhambra Theatre Dunfermline and Cinderella click HERE.

Each quarter receive a personal update to your inbox with a more detailed look at my process, plus competitions and discounts.
SUBSCRIBE HERE

The gift of original art 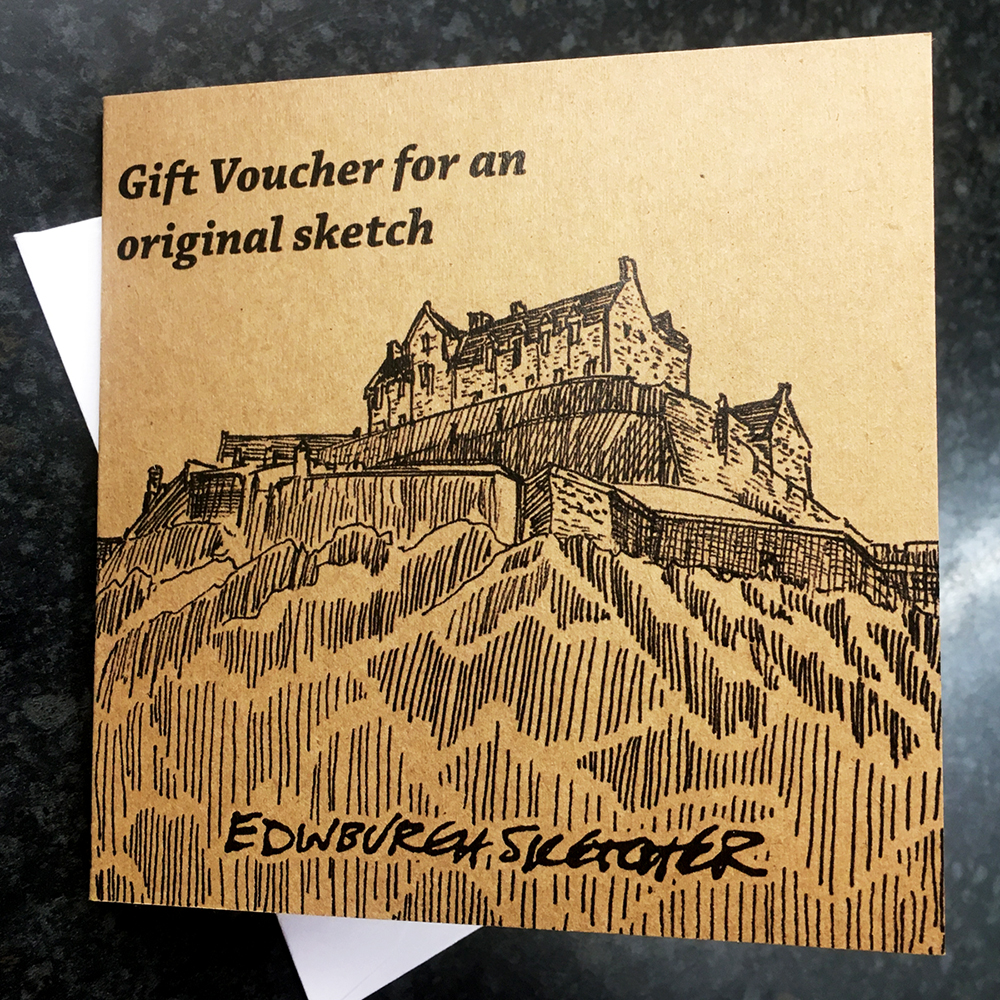 Book me to capture your Wedding Day
in watercolours. MORE INFORMATION HERE 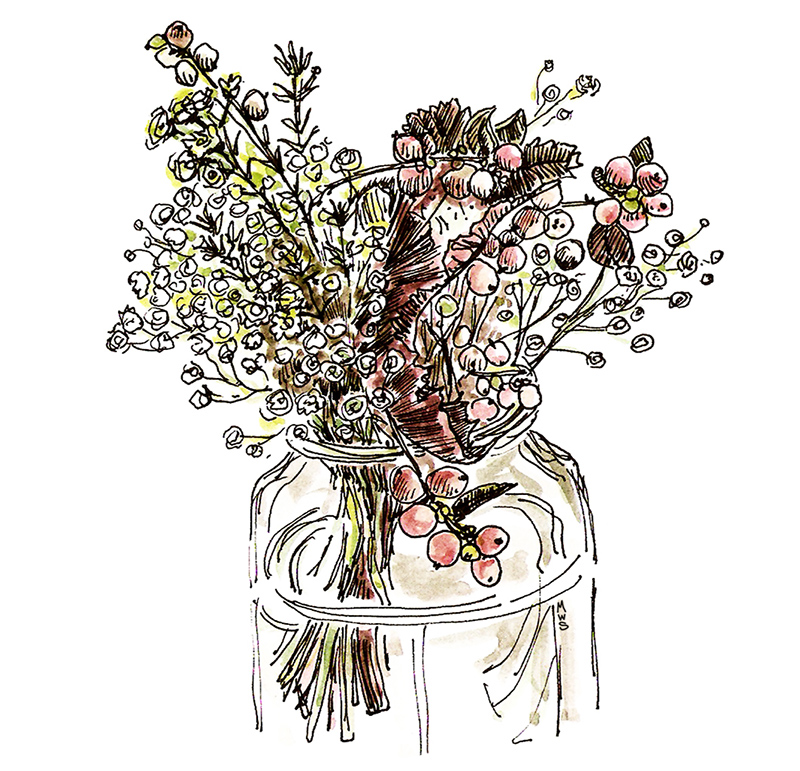 Buy my art printed on a number of items
BROWSE HERE 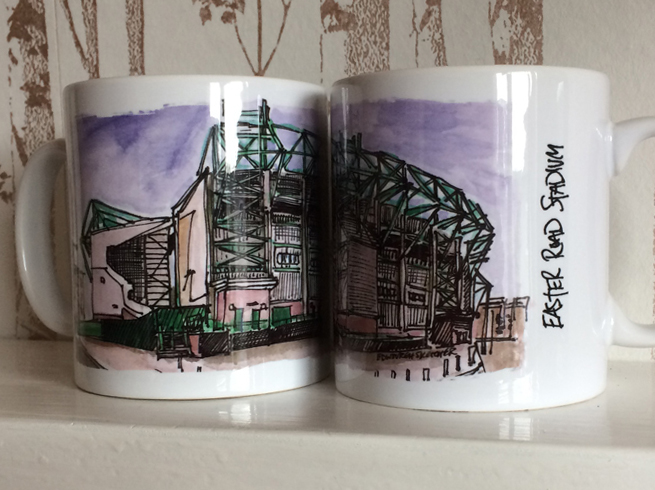